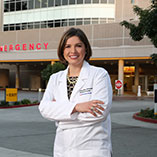 Dr. Kotikian Born in London, England, Dr. Sylvia Kotikian moved to the United States when she was 2 years old. She attended college at the University of Southern California, graduating Summa cum Laude with a BS in Psychobiology in 2001. In the summer of 2000, Dr. Kotikian performed research at Columbia University in the lab of neuroscientist Dr. Eric Kandel, who was subsequently awarded the Nobel Prize in the fall of the same year. While at USC, Dr. Kotikian spent 6 months in Madrid, Spain, studying abroad and improving her Spanish skills. In August of 2001, Dr. Kotikian moved to Baltimore where she attended Johns Hopkins University School of Medicine. She graduated with an MD degree in 2005. She subsequently pursued her residency at Henry Ford Hospital in Detroit, Michigan. She served as chief resident in her final year of residency, lecturing at several Grand Rounds. Graduating from residency in June 2008, she served as attending physician at Henry Ford Hospital through November 2008, when her first child was born. Shortly thereafter, Dr. Kotikian and her husband, Dr. Armond Kotikian, moved back to the Los Angeles area. Dr. Kotikian joined the Glendale Adventist Medical Center as a board certified emergency physician in July 2009 where she has been practicing ever since. She currently serves as the associate director of the Emergency Department at Glendale Adventist. She is an active member of the GAMC staff, attending Peer Review Committee meetings, community volunteer programs and proctoring high school students, medical students and residents. Dr. Kotikian has been a proud and active member of AAMS since 2010.