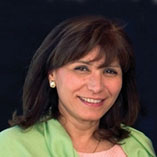 Dr. Salpy Akaragian, PhD, RN, NPD-BC, PHN – President and Founder of Armenian International Medical Fund (AIM Fund) is the Emeritus of UCLA Health’s Director of the International Nursing Program, and Nurse credentialing. She received a Bachelor of Science, Master of Science and Philosophy of Doctorate degrees in Nursing from UCLA School of Nursing. She was the US Partner Representative for USAID/AIHA grants from 1995-2004, directed multiple health care projects and initiated reforms and development programs in Armenia. In 2004, she established The Cochlear Implant Center in Yerevan with the AIM Fund. She is the founder and first president of the Armenian-American Nurses Association in California and in 1996 facilitated the formation of the Armenian Nurses Association in Armenia. She has served on the California Board of Registered Nursing as a board member, served as a Magnet Appraiser for American Nursing Credentialing Center, and is board certified in nursing professional development. Salpy received Regional and National Gem awards from Nurse.com and in 2014, she received Ellis Island Medal of Honor. She has presented on various health related topics at National and International Conferences.